Restoring Trust? Taxes Are The Best You Can Hope For

This week, hundreds of the world’s wealthiest, most influential people will be participating in the World Economic Forum’s “online Davos” program. Billionaires, corporate executives, and heads of state will gather to discuss how to best solve the world’s various problems, all while ignoring the obvious solution staring them in the face: Tax the Rich.

The last two years of pandemic have seen the richest people in the world grow their wealth by leaps and bounds, while the vast majority of people have been left worse off. Here in the United States, billionaire wealth soared over $1 trillion in 2021 alone, an increase of over 25%, all in the same year that saw important pandemic aid cut off for tens of millions of needy Americans, and further aid stalled by Congressional Democrats’ inability to agree on a legislative package that would invest in American families with tax hikes on wealthy Americans.

Faced with these massive challenges and the global establishment’s unwillingness to confront their root causes, the Patriotic Millionaires are challenging Davos attendees to stop navel-gazing and start talking about taxing the rich.

On Monday, Oxfam International released a new inequality report with staggering statistics, like the fact that the 10 richest men in the world have doubled their wealth since the pandemic started, while 99% of the world has seen their incomes decline. Or the fact that inequality kills someone every four seconds.

In the foreword to this report, Patriotic Millionaire Abigail Disney makes an impassioned plea for world governments to start taking seriously the obvious solution to these problems – taxing the rich. Read her foreword, and the full report, HERE. Watch her talk about what really happens at Davos HERE.

“If Jesus Christ went to Davos he would be displeased to say the least.” @abigaildisney 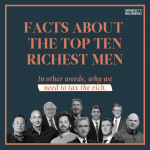 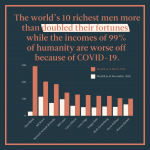 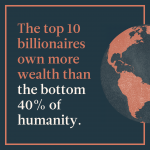 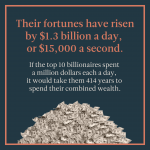 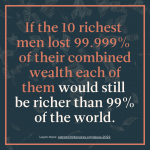 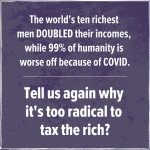 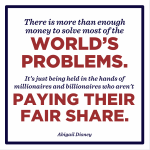 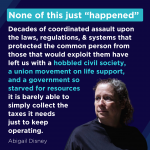 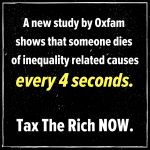