In a year of divisive rhetoric, the Patriotic Millionaires are working to find bipartisan solutions that benefit ALL Americans. And the country is taking note – USA Today ran this feature article about our efforts. 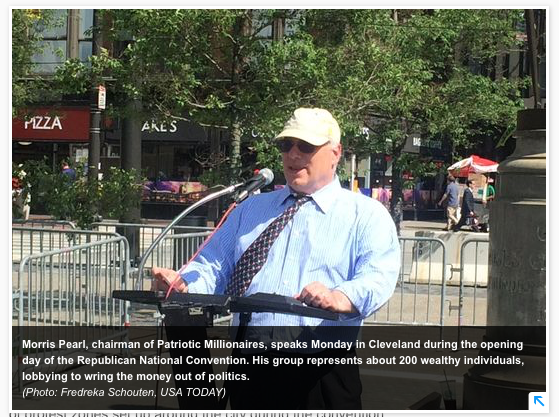 The two men took to a makeshift stage to argue it is an issue for all Americans that the nation’s wealthy elite have too much power in elections. Republicans, Democrats, and Independents are all worried their votes do not hold the same weight as special interest groups, lobbyists, and corporations with large donations.

Morris and John took a critical step yesterday starting the conversation about the need for campaign finance reform. Read about their concerns and ideas in this USA Today piece and then share with your friends and family. Keep the conversation going – engage in your community.

Together, our pressure on both sides of the political spectrum will change the status quo. Together, the Patriotic Millionaires know we can make a difference.

Patriotic Millionaires · 16 hours ago
@PatrioticMills
Republicans shouldn’t be debating who we should pay first if we breach the debt limit.

There’s no Plan B. There’s nothing to debate. We need to raise the debt ceiling to avoid ruining the entire global economy.
https://t.co/QfDtkL4Lu8
View on Twitter
5
6
Patriotic Millionaires · 16 hours ago
@PatrioticMills
Meta, just a few months after laying off over 11,000 of their employees, announced $40 billion in stock buybacks.