This week, the Chair of the Board of the Patriotic Millionaires and members of the group met with Senators, top officials from both parties, leading progressive organizations, and dozens of major donors to the Democratic Party, the Democracy Alliance, and other progressive groups.

In these meetings, the non-partisan Patriotic Millionaires demanded Democrats and Progressives draw a firm line in the sand with President-elect Trump and GOP leadership around taxes and minimum wage. They urged Republican lawmakers to work with their Democratic colleagues to stabilize the country by cutting the right deal for working Americans – pushing them to make a permanent commitment to the idea that if you work full time you can afford your basic needs, and that if you are a millionaire, a billionaire, or a multinational corporation, you are going to start paying your portion of the tab for running this country.

In every meeting the group left behind a letter that you can read here and below. 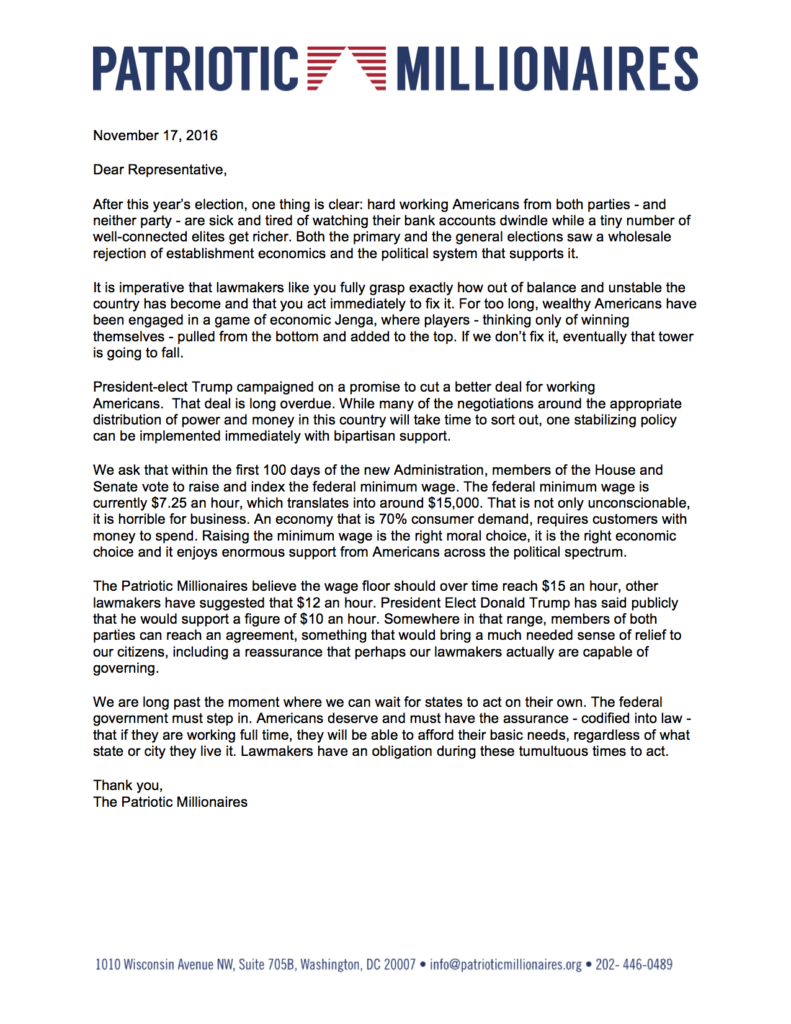 Last year the group released Re-Negotiating Power and Money in America, a volume which suggests that this fractious moment in the country is, at its core, a negotiation around two things: power and money. In that volume, the Patriotic Millionaires said “We have been playing a game of economic Jenga, where players – thinking only of winning themselves – pull from the bottom and add to the top, making our country less and less stable. If we don’t fix it, eventually the tower will fall.” The volume offers a “Term Sheet” around which negotiations should center. In business deals, a term sheet is a bullet-point document that outlines the material terms and conditions of a business agreement.

The group notes that its “deal terms” enjoy enthusiastic support from the bi-partisan majority of Americans:

“Hard working Americans from both parties – and neither party – are sick and tired of watching their bank accounts dwindle while a tiny number of well-connected elites get richer. Both the primary and the general elections saw a wholesale rejection of establishment economics and the political system that supports it,” said Patriotic Millionaire Chair Morris Peal. “If President Trump really wants to cut a better deal for America he should prove it. He should immediately raise the minimum wage so that American citizens can know – with certainty – that if they are working, they will be able to afford their basic needs. And his tax plans should ensure that millionaires and corporations are paying a bigger percentage of the tab for running this country, they have skipped out on the bill for too long.”

If you want to join the Patriotic Millionaires in advancing decent wages for all, give your Senator a call and tell them to support raising the minimum wage. You can find the number for your Senator’s DC office HERE.

We can do all that and more!
#sotu2023
View on Twitter
4
10
Patriotic Millionaires · 8 hours ago
@PatrioticMills
A defender of the rich and powerful to the bitter end https://t.co/YoVt9A3qnX
View on Twitter
Taylor Seely@taylorseely95
“Senator Sinema, who as a Democrat blocked her party’s efforts to raise taxes on corporate America, did not join Democrats in resounding applause for Biden’s push to raise taxes on the wealthy and large companies.” via @NYTimes https://t.co/XiuIri4NPF
2
14
Patriotic Millionaires · 8 hours ago
@PatrioticMills
. @POTUS has got it right - giving American workers a living wage increases productivity and economic growth.