I grew up in the tobacco fields of North Carolina. I worked for my father on our small truck farm as a child. My first paid job was for a local tobacco farmer paying $.15 an hour. I was “handing” tobacco leaves to woman who was a “stringer.” She would deftly grasp the 3 leaves in my 12 year old hand and quickly flip them to hang by string from a pole, which then went into a barn for heat “curing.” Then came mowing lawns, grocery store, filling station, and summer factory work. My wages went up to $.75 per hour when I worked in the library at college. When I got my first full time job, I had to ask my employer for an advance on salary so I could buy a suit and a pair of shoes acceptable for a young banker.

While I started poor, workers in my generation (“baby boomers”) found plenty of good jobs after school, both for college graduates like me and also for those who didn’t go to college. Wages advanced steadily. That was the 60’s and early 70s. We had millionaires, but their tax rates were high and that didn’t prevent them from investing.

It all began to change in the mid 70s, and has continually worsened since then. The deteriorating state of jobs and wages since the 70s are the prime reasons for anger that motivated electing Trump. But this experience in incomes has not been the case for the top income brackets: 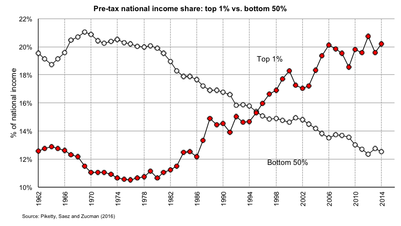 Donald Trump understood the justified anger of Americans living hand to mouth, paycheck to paycheck. He also saw an opportunity to use your anger and ride it to the Presidency. I compliment him for this astounding accomplishment. But now he has the obligation to do something about it. He also has the opportunity to  create a great legacy.

The legacy is to deliver on his promise to improve jobs and wages. What is President Trump proposing to improve the income of the lesser privileged of us? I can’t find anything yet. He’s not fighting for an increased minimum wage. He’s not offering to expand the Earned Income Tax Credit to low income men who do not have children, or increase the food stamps program. He hasn’t proposed to expand or even retain the Trade Assistance Program, which helps workers who are displaced. He’s not proposing the single payer health system, which he himself advocated only three years ago.

In order for us to realize a future with good jobs and rising wages, we must look forward. The United States, the most advanced economy of the world, needs to lead the way into the knowledge economy. The future can be good for all of us, but there is work to do to make it so.

We need our President to understand that we can’t allow capitalism, based only on the profit motive, to run wild. Government is needed to control the excesses of business, which otherwise will inevitably shortchange workers for the benefit of stockholders. CEO’s of the top 350 US companies now make 296 times that of the production/non-supervisory employees. They made only about 20 times in the 1960s. What’s wrong with a limit for CEO pay of say 100 times the median of the employees, motivated by tax benefits, as just one example of something the government could do? For my former employer, Wells Fargo, that would mean the CEO would make about $7 million per year, instead of 3 times that. The difference could go to employees. Does anyone doubt an excellent CEO could be found for $7 million per year?

We also need a new way to reward and engage the communities in which businesses serve and which house and feed them. The President could propose that a minority share (perhaps 10%) of the ownership in all new ventures be granted to the community in which the business works or sells. The remainder would be enough to continue to motivate our smart entrepreneurs. This could be one way to start a process of sharing the benefits of our technological and other advances into the future. The communities can give back in return—build housing, create schools, and innovate new products with shared benefit for all.

We will need a much larger investment in skills training and education in very specific ways to better enable everyone in our workforce to participate in the knowledge economy. President Trump has said nothing about this. Nothing. I’m willing to pay more taxes if it’s for these kinds of forward moving advances, which move us to a future era where wages are once again adequate and prosperity is shared. I’m not willing to pay more taxes for a wall or expanded military.

Donald Trump still has a chance to be great President, but so far he is on the wrong track.

This is a mistake. - Raising interest rates just hurts ordinary people when we should be going after price-gouging corporations using inflation to pump up their own profits. https://t.co/5RGS8YpIkU
View on Twitter
Ben Casselman@bencasselman
As expected, the Federal Reserve raised interest rates by a quarter percentage point, their smallest increase since March.
Press release: https://t.co/7VpThNBm9k
Full coverage: https://t.co/BMB9xnMu2d
9
29
Patriotic Millionaires · 5 hours ago
@PatrioticMills
Black Americans are 3x more likely to be audited by the IRS- even accounting for the types of returns they file

Any wonder the GOP wants to cut IRS funding?
https://t.co/RSQJGpRRNx
View on Twitter
4
9
Patriotic Millionaires · 6 hours ago
@PatrioticMills
To be clear: there’s nothing to “discuss” when it comes to the debt ceiling. It has to be raised.

Today, Biden should stand up to GOP bullies & not allow them to hold the entire global economy hostage in their pursuit of destroying the social safety net.
https://t.co/eN9oWX3agR
View on Twitter
29
124