This is one of a series of posts on Trump’s recent tax proposal. To see the entire collection of posts, click HERE.

What is the corporate tax rate?

The corporate tax is the rate at which businesses are taxed on their income. The current corporate tax rate in the United States is 35%, although due to loopholes and deductions, very few businesses pay even close to that rate. Under Trump’s proposal the corporate tax rate would be lowered to 15%, but without closing any of the loopholes that would allow this move to be revenue neutral. This is likely to result in an increase to the deficit of between $3 trillion and $7 trillion over the next decade.

Who does this impact?

Though it is possible that some small businesses could benefit from this new tax rate, the majority of those impacted will be large corporations and wealthy individuals who can register as LLCs in order to record income as pass-through and receive the much lower corporate rate on personal income. Pass-through income is money that goes to its owners by way of a pass-through entity which is not taxed, allowing income passed through it to be taxed at the individual rate, rather than the higher corporate tax rate.

Why should you care?

Central to the mission of the Patriotic Millionaires is that those who can afford to should pick up more of the tab for running the country. Though our focus is on millionaires and billionaires, corporations pay an incredibly important role in this as well. Donald Trump’s proposal to slash the corporate tax rate to 15% without any plan to close the current abundance of loopholes is irresponsible and dangerous. Though the current corporate tax rate stands at 35%, few large corporations truly pay their taxes at that rate, if they pay them at all. Donald Trump claims that the current corporate tax structure is bad for business, but it’s hard to see how this is the case when companies like Apple get away with paying next to nothing in taxes. At present, corporate taxes bring in just 10.6% of federal revenue, a major decline from the 1950’s when corporate taxes paid for nearly one third of government services.

For the next post in this series, click here to read about Trump’s plan to repeal the Affordable Care Act’s taxes on high-income Americans. 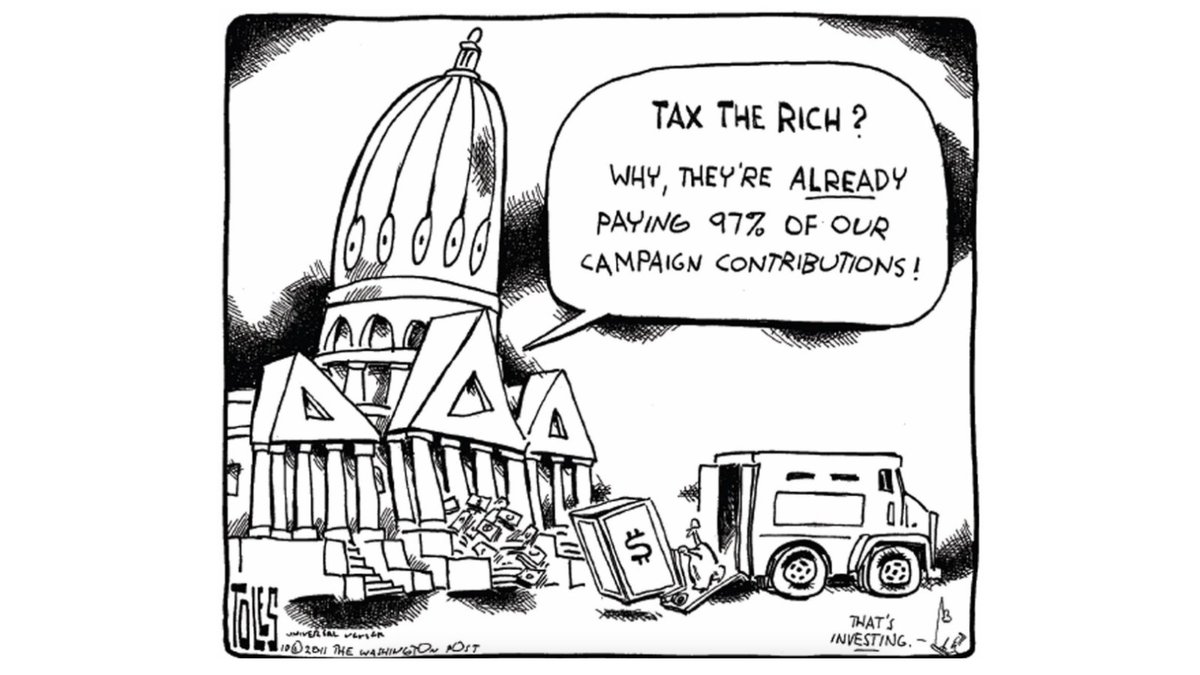 Big corporations and the ultra-wealthy can and should pay their fair share. https://t.co/2uFVT5Ift3
View on Twitter
11
23
Patriotic Millionaires @PatrioticMills
22 hours ago
This is what is looks like for Democrats to start getting serious and actually Get. Stuff. Done.

We're done playing in the little leagues– we have to pass legislature that will have REAL IMPACT. https://t.co/CthzOy6Pcd
View on Twitter
Rep. Alexandria Ocasio-Cortez @RepAOC
The coverage of the infrastructure bill and the budget reconciliation bill can be a bit confusing and mystifying.

So, what’s the deal with these two bills meant to address our infrastructure needs? Why do we need to pass both?

Patriotic Millionaires3 days ago
Kyrsten Sinema is ready to sellout Americans once again. Join the fight at TaxTheRich.com