If Jeff Bezos Can Afford to Go to Space, He can Afford to Pay more in Taxes – Patriotic Millionaires
Menu
Skip to content
Menu
Tweet

Yesterday, Jeff Bezos went to space. In response, the Patriotic Millionaires released the following statement on the morning of launch day from one of our members, Stephen Prince:

“Sixty years ago, we sent the first American into space, and the top income tax rate was 91%. Today, a billionaire launched himself into space after paying a true tax rate of less than 1% for years. This may be a good day for Jeff Bezos, but it’s a sad reminder of just how far our country has fallen. If we ever want to return to an era where we accomplish incredible things together as a society, we need to start taxing the rich again. If Jeff Bezos can afford to go to space, he can afford to pay more in taxes.”

Stephen is right. Sixty years ago when we sent the first Americans to space, we sent them as representatives of the entire country in a truly monumental moment in US history that was only made possible because of government spending and public investment. Now, billionaires get to go to space for their own personal satisfaction and glorification, using money that they accumulated while paying almost no taxes.

The success of the US in the 20th century was built on a foundation laid at a time when the top tax rate for the ultra-wealthy was miles above what it is today. In 1961, when the first American was sent to space, the top marginal income tax rate was 91%! It hovered around that level for most of the 50s and 60s, a period that many consider an economic Golden Age for the United States, with broadly shared prosperity and economic growth for Americans of all income levels. Even up until the 1980s, the top tax rate was 70% or higher for most of the 20th century.

America’s economic success didn’t occur in spite of these high tax rates, it happened because of them. With the rich paying their fair share, we were able to grow our economy and invest in things like the interstate highway system and the space race that benefited all Americans, not just those with millions of dollars to blow on a short trip to space. 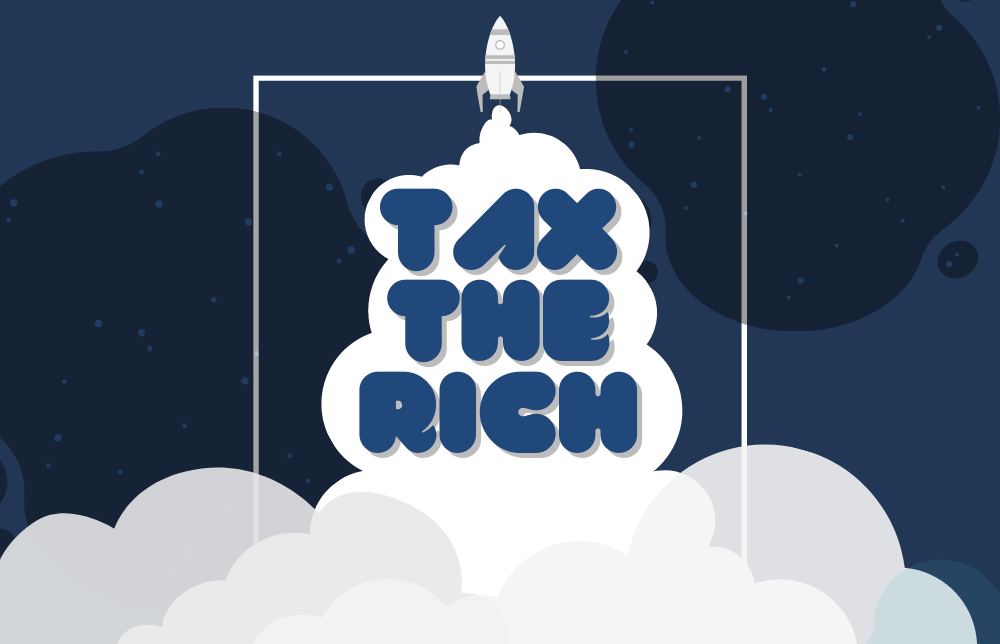 Fast forward to today, and billionaires pay almost no taxes, unlike working Americans across the country who pay their fair share. The recent ProPublica IRS exposé revealed that in 2007 and 2011, Jeff Bezos actually paid $0 in federal income taxes. More recently, he watched his wealth grow $99 billion from 2014 to 2018 and paid only 0.98% of that in taxes.

His peers, Warren Buffet, Elon Musk, and Michael Bloomberg, also watched their wealth increase by hundreds of billions of dollars over the course of 4 years, and each ended up paying less than 5% of that increase in taxes. In Buffett’s case, he paid a truly shocking 0.10% real tax rate – that’s the equivalent of paying $50 in income taxes on $50,000 of income. This is truly unacceptable.

This is why we’re not cheering for Bezos’ space launch. If billionaires want to spend their money on going to space, that’s fine – but we cannot continue to celebrate the results of extreme wealth that only exist because billionaires are able to avoid paying their fair share.

Our country is at a crossroads. We have two options. We can either:

1. Invest in our country like the Biden administration is calling for, expanding funding for universal pre-k for families, infrastructure, broadband access, nutrition assistance, expanded child tax credits, and clean energy incentives, all paired with significantly higher taxes on millionaires, billionaires, and corporations (taxes that they can more than afford to pay)

2. We can preserve these low tax rates, continue to cripple the federal government’s ability to do anything significant, and face a future where we live in a pale shadow of the country we used to know while billionaires fly around in their spaceships above us all.

We know which country we would rather live in. What about you?

Patriotic Millionaires · 2 hours ago
@PatrioticMills
ICYMI Democrats were unable to pass their voting rights reform package due to resistance from Sen. Manchin and Sinema in the face of changing the filibuster.

Rest assured that we remain committed to doing our part to safeguard our democracy from GOP disenfranchisement efforts.
View on Twitter
0
6
Patriotic Millionaires · 12 hours ago
@PatrioticMills
Take it from us millionaires— we can afford to pay more in taxes.

Tax us now.
#TaxTheRich.
https://t.co/9ytR6TQrUN
View on Twitter
18
34
Patriotic Millionaires · 20 hours ago
@PatrioticMills
Inequality– from lack of access to healthcare, hunger, and more– is killing thousands around the world on a daily basis.

People need to know about the state of inequality in the world today and its deadly consequences.