Candidate Donald Trump made a wide array of campaign promises that he is now enacting as President Trump. His recent attacks on financial regulations will serve to help the wealthy and big banks, not regular Americans. As early as next month Americans can expect to see major tax reforms proposed and it is likely the plan will include another one of Trump’s proposals: eliminating the estate tax.

During my travels, The Patriotic Millionaires assigned me to attend the Orlando Trump rally to discuss the estate tax with other attendees. I jumped on board, and tweeted about it.

The Patriotic Millionaires do a lot of work with tax justice. Why focus on the estate tax?

“In a 2006 study, 49% of respondents thought that the estate tax affects “most families” (the correct answer is less than 2 in 1000), explaining why Republicans can continue to claim that estate taxes destroy small family farms despite failing to identify a single example. Indeed, a recent study found that giving people information about the actual incidence of estate taxes increased support from 17% to 53% of respondents.” — Patriotic Millionaires

So begins the journey…

Talking the #EstateTax at a #Trump Rally on Behalf of @patrioticmillionaires 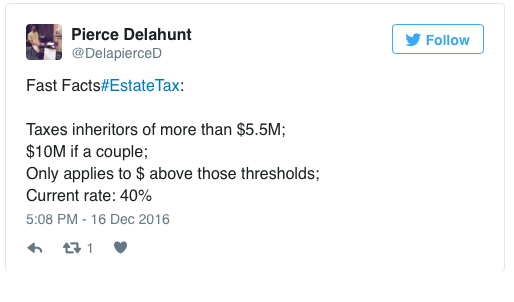 “The entrepreneur who dies owning his business never pays any income tax on the increase in the value of his business from zero when he starts to (in our example) twenty million dollars (because he never realizes the gain; the tax on the gain from owning a business or other investment which increases in value is paid only when it is sold).” —  Patriotic Millionaires. 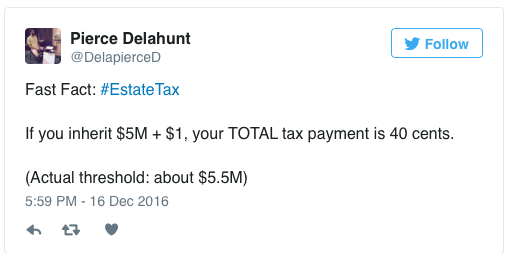 “The tax on inheritances is limited — fewer than 2 in 1,000 estates is large enough to be subject to it. It isn’t a death tax: It targets a transfer of wealth, income or property, just as most federal taxes do. Nor is it a double tax: The bulk of the wealth subject to estate taxes is in appreciated capital assets and has never been subject to any tax.

It’s telling that the candidates who campaign on a platform of repealing the estate tax grew up in wealthy families where just such appreciated assets have made the tax a personal issue. Yet they cast themselves as examples of individual deservedness and success, everyday people who worked hard, paid their taxes and want to pass their already-taxed wealth on to their children.” —  LA Times. 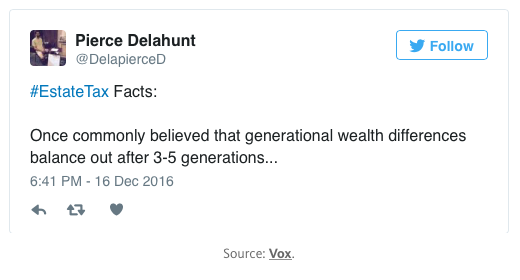 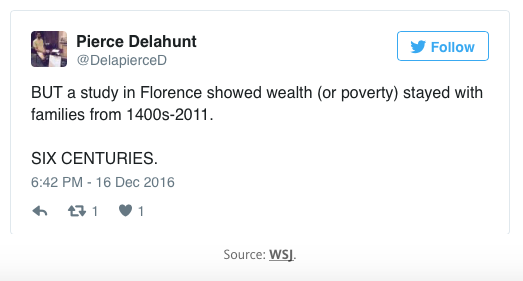 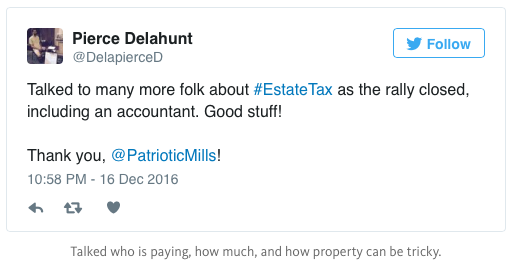 I hope you can see at least some merit behind the estate tax, and more generally the concept of taxing wealth more than taxing work. I think the more we study this, the more we realize how necessary it is.

“The evidence is that the majority of people’s outcomes are predictable at the time of birth and are not under individual control. If we understand how strong this inheritance is, we can be more sympathetic to the idea that the rewards for ending up higher or lower on the social spectrum should be made less. We don’t want a society where the winners are already determined at the point of conception.” —  New Republic.

Beyond advocating for the estate tax, there are efforts to make it even more progressive:

“ENACT A MORE PROGRESSIVE ESTATE TAX. The estate tax is a tax on the transfer of assets at death (inherited wealth). It applies only to very large accumulated fortunes — an individual may currently pass $5.12 million on without paying any taxes. White families are 11 times more likely than Black and Latino families to have enough wealth to owe any estate tax at all. We should change the estate tax so that taxes are paid on any inheritance over $1 million, with a tax rate that increases the larger the estate is. This would raise more than $500 billion over 10 years.” —  Resource Generation.

Patriotic Millionaires · 16 hours ago
@PatrioticMills
Republicans shouldn’t be debating who we should pay first if we breach the debt limit.

There’s no Plan B. There’s nothing to debate. We need to raise the debt ceiling to avoid ruining the entire global economy.
https://t.co/QfDtkL4Lu8
View on Twitter
5
6
Patriotic Millionaires · 16 hours ago
@PatrioticMills
Meta, just a few months after laying off over 11,000 of their employees, announced $40 billion in stock buybacks.