In order to ensure the passage of the Tax Cuts and Jobs Act of December 2017 (TCJA), the GOP expanded a loophole to particularly benefit those who would vote on it: themselves. This includes deficit-hawk Senator Corker (TN), who had been undecided on breaking his promise to not add to the deficit. Now, the GOP are trying to make that loophole a permanent tax deduction.

Because of a deduction added to the “pass-through” loophole, fifteen Republicans from tax-writing committees will receive an average tax cut of $314,000 this year.

Pass-through tax status is ostensibly meant to help small business owners by allowing earnings to be passed through to themselves  —  and therefore taxed as personal income instead of corporate profit. TCJA broadened this loophole with a 20% deduction, meaning a pass-through of $100,000 would only be taxed on $80,000. $20,000: tax-free.

The GOP’s admittedly effective marketing has branded them, for many, as the fiscally responsible adults in the room. While a lot went into this, two simple pieces are their constant rhetoric of “Jobs” and “Small Businesses”  —  code for profits and the wealthy.

“The top 1 percent of households get more than a fifth of their income from pass-throughs, compared to less than 6 percent for households in the middle 60 percent of the income distribution.”  —  Center on Budget and Policy Priorities (CBPP)

As such, it makes sense that less than half of those claiming pass-through income are actual small business employers or employees. Most are not even businesses: 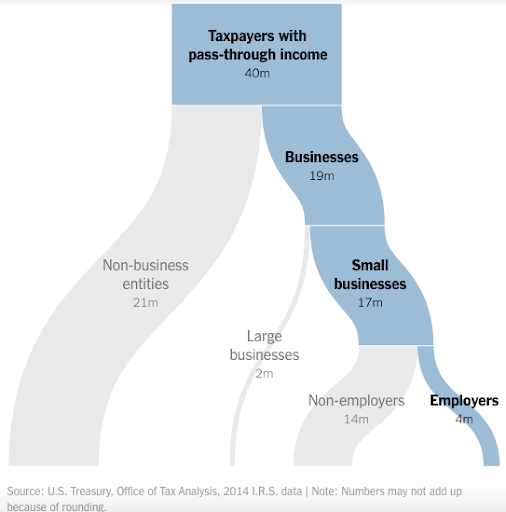 Understand: all fifteen Republicans who wrote TCJA stand to gain, on average, $314,000 each  —  from this one deduction. Meanwhile, those same writers of the bill, with no explanation, specifically excluded architects and engineers from claiming the deduction through their own businesses.

The fifteen include Reps Vern Buchanan (FL) and Diane Black (TN), both members of the House Ways and Means Committee. Black stands to gain up to one million dollars from this one loophole. Buchanan: up to two. Senator Bob Corker (TN) originally vowed to oppose any legislation that added to the deficit, but ultimately voted for the bill after it made the pass-through deduction more generous for real estate investors  —  such as himself.

CAPAF: Pass Through Deductions of Congress, by Size of Highest Potential

Republicans harp on making taxes simpler, but they consistently make taxes more complicated in favor of themselves and their donors. Notice how “index card taxes” (and term limits) never survive after elections? The pass-through deduction is just the latest in their syphoning of wealth from the country. And now, they want to make the 20% deduction permanent in the next round of tax cuts.

While members of Congress will inevitably benefit from any tax cuts, this targeted tax relief further burdens the middle and lower class with ever greater wealth inequality. Why harp on this obscure deduction loophole? Because making this deduction permanent would transfer $30.5 billion to the already top 1% in income every year. Make no mistake: This is Class War. 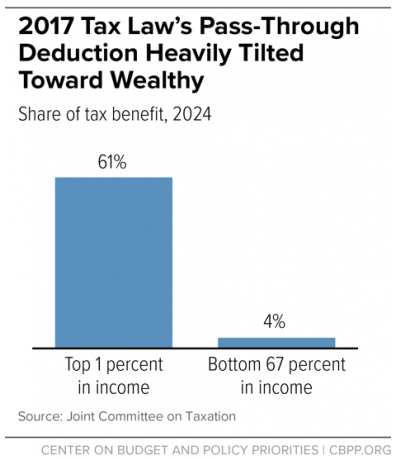 Remember: the writers of this bill further complicated this system for a reason  —  to take advantage of those complications. Then the GOP hides behind them with fake empathy, bonding over outrage at this system as a recruitment tool.

Taxes seem insufferable precisely because the ruling class does not want us to engage with them. I used to be both confounded and miserably bored by taxes. And why would anyone want to work so hard to understand something that offers no meaning or joy? It turns out, anything is engaging when examined with a justice lens, even taxes, trucks, and sports (the things that tend to bore me).

Stop them when they try to talk over our heads, saying “The system is so complicated there is little we can do.” Stop them from using gaslit government frustration as a recruiting tool. And start presenting a #TaxJustice platform that counters their recruiting efforts.

Understanding taxes as if people matter is how to get people to both care and make sense of economics.

Patriotic Millionaires · 17 hours ago
@PatrioticMills
Republicans shouldn’t be debating who we should pay first if we breach the debt limit.

There’s no Plan B. There’s nothing to debate. We need to raise the debt ceiling to avoid ruining the entire global economy.
https://t.co/QfDtkL4Lu8
View on Twitter
6
6
Patriotic Millionaires · 17 hours ago
@PatrioticMills
Meta, just a few months after laying off over 11,000 of their employees, announced $40 billion in stock buybacks.